Photoshop? Despite what you may think, this is actually a real photo.
Taken by Frans Lanting, a photographer for National Geographic, a soaring dune is tinted orange by the morning sun, and is the backdrop for these camel thorn trees in Nimibia-Naukluft Park. You can read more about the story of Nimibia’s coastal parks here and check out more photos in this series from Frans in the gallery above. If you’re interested in acquiring this photo as a fine art print, email gallery@lanting.com

Over a Million in a Year

For the past couple years we’ve been working hard at improving snapsort.com, thankfully we’ve had some strong success, the photography community has helped make us the second largest website providing camera gear advice (next to Amazon’s dpreview).  We launched the first full version of our camera site in June 2010, about a year later we’re helping over a million people every month find the right camera. You can celebrate with us and get a chance to win a Nikon D3100 or Canon S95 (donated by the awesome crew at Adorama)

When we started Snapsort we had a simple goal: “help consumers make informed purchasing decisions quickly”.  We had broad goals, we were so incredibly frustrated with how hard it was to find the right product for oneself we wanted to make it easier for every single purchasing decision.  We needed to first prove we could help one group of people before we went off helping a thousand, so we focused on cameras and refined our recommendation platform.

Two years later we’ve developed a mature, stable and extremely helpful recommendation platform that we’re ready to scale out.  Our goal is 20 categories by the end of the year.  We’re hiring super smart engineers if you want to help us reach this goal :-).

Yesterday we launched our new recommendation platform in 3 verticals:

What’s the Big Deal About our new Platform?
It turns out it’s extremely difficult to make it super easy for users to easily find the right product.  Most of our time in the last two years has been spent engineering a scalable solution to:

What we release today is 1.0 of our platform, we think its the best thing going on the web, so does everyone we talk to.  It probably represents about 5% of what we intend to build so stay tuned for vast improvements.

We sincerely hope you like what we’re doing and if you do you share it with friends, family and co-workers.  The only way we succeed is if we help you make better decisions and you share the experience with others.

Snapsort Team
After looking at our data from 2010 we have come up with a list of the top 5 most searched for cameras on Snapsort this year.
Canon EOS Rebel T2i

We’ve made another minor update to Snapsort.com today!

1. Popular comparisons on the main page 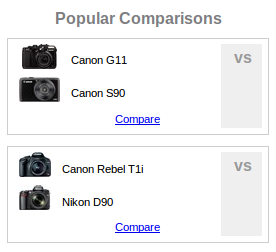 The welcome page on snapsort.com now features the 6 most popular comparisons by users!

Right now it looks like its quickly become dominated by SLR-SLR comparisons, though for a while the Canon G10 vs Canon G11 was quite popular, and you can see the Canon G11 vs Canon S90 on this screen shot.

2. Popular comparisons for each camera on comparison pages

On each comparison page, we now show 6 popular other cameras that each of the two has been compared against, so you can see what other people have been comparing that camera to.

Here is a screen shot showing the current popular cameras that people have compared against the Panasonic Lumix DMC-GF1.

We’ve added a comparison search on the top right of the comparison screen, which we hope will make it faster/easier for you to change one of the cameras in the comparison, say you’re comparing one particular model against a number of other models.

5. Small tweaks to the SnapRank algorithm

Point and shoots used to have an unfair advantage against SLRs, that has been improved now, but it still needs work.

6. Added a slightly humorous page to show you if you try to compare a camera against itself