Today we released an update to Snapsort.com.  It includes: prices for most cameras currently available for sale, links to buy those cameras, recently announced cameras, and a few small updates.

Snapsort.com now integrates pricing data from a few retailers, allowing us to do two things:

For example, if you compare the Canon Rebel T1i to the Nikon D90 snapsort.com will tell you that the best price we’ve seen for the T1i is $146 less (as of today).

You can now click through to a page about any specific camera, so if you look at the page about the Rebel T1i you’ll see that we have pricing for the camera body only, and in kits, from a few different retailers!

Recently Announced Cameras
Snapsort.com now includes a number of new cameras released in 2010.  It can be interesting to compare new releases against the previous year’s model to see what has changed! For example:

As I mentioned above, snapsort.com now has individual camera pages – previously we had only comparison pages.

These pages are fairly bare bones at this point, and we’ll be filling them out over time.  They include a brief overview of the camera, specifications, prices, and competitors. 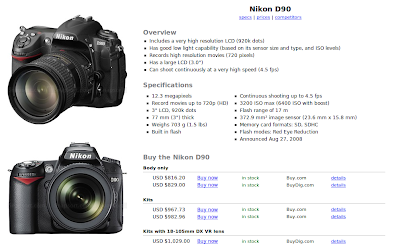 We’ve made a few other small improvements.

For example, if you compare the Panasonic DMC-ZS3 to the Canon S90 you’ll see that Snapsort points out that the S90 has a wider aperture (f/2 vs f/3.3) which lets in 1.4 f-stops more light!

Other small improvements include a couple bug fixes and image improvements pointed out by users at our support community.

If you’d like to hear about future improvements, there’s a whole ton of ways to stay in touch with us including: following @snapsort on twitter, subscribing to our blog, or becoming a fan at facebook.